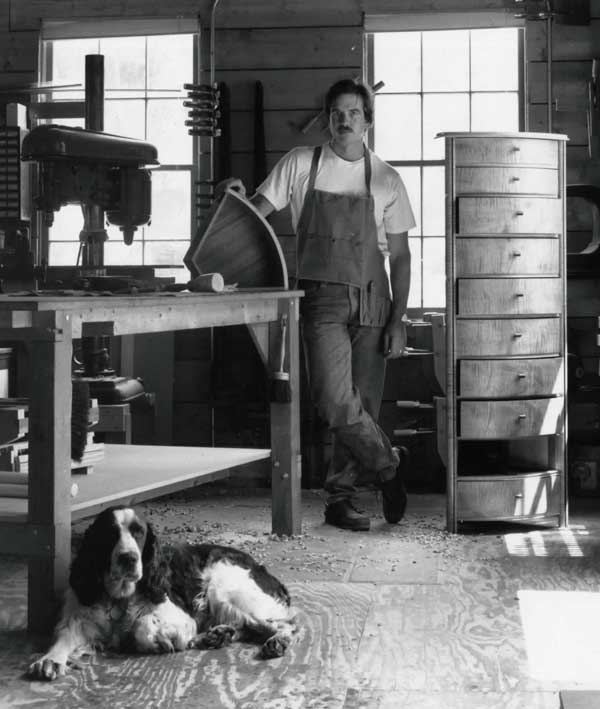 In 1981, while studying philosophy at Boston University, John took an elective course in woodworking at the Program In Artisanry (PIA), a school within the university. The revelation was immediate, like flipping a switch; building furniture was what he wanted to do. He became enamored with all aspects of the vocation; machinery, tools, hand work, joinery, drawing, creativity, and problem solving. He looked into transferring from the College of Liberal Arts to PIA, but it would have meant starting another four year program. A graduate student at PIA advised him to buy tools instead; “First, you’ll need a band saw.” In 1983 John received a BA in philosophy from the university. However, the interest in furniture making did not wane.

In 1985 John and a friend, a former PIA student, decided to set up a small shop in South Natick, MA. Both were working for a nursery doing landscape construction, and the owner of the nursery agreed to rent them space. John purchased two used machines for the shop, a 20” band saw, and a 17” drill press.

It was during this time that he learned the fundamentals of woodworking and how to design and build a piece of furniture. In 1988 John moved the shop to its current location, an antique barn in Hopkinton, MA. He has been designing and building furniture in the barn ever since.

John is married with two children. He enjoys being outdoors, camping in the summer, and skiing in the winter.

John designed and built a dining room table and a bench. The workmanship was excellent. Great to deal with. A+
David , Hopkinton